One of Perth’s most iconic homes, built by high-profile businessman Alan Bond and his wife Eileen, has sold for $27.5 million, in what could set a property sales record for Perth this year.

The spectacular riverfront mansion at 89 Watkins Road in Dalkeith is believed to have been purchased by former bodybuilder Danny Pavlovich and his wife Suzie. Mr Pavlovich is the chief executive of Nutrition Systems, a distributor of supplements and nutritional products.

But the hefty price tag is well shy of the $50 million it was originally listed for in 2017 before Mr Bond’s real estate agent daughter Jody Fewster took over the listing last year with a heavily reduced price guide of $35 million. 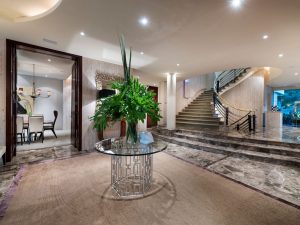 Originally designed by renowned Perth architect Geoffrey Summerhayes and updated by Andrew Boughton, the 6406sqm estate is spread over six titles on a quiet cul-de-sac and takes in 270-degree views of the Swan River.

There are three kitchens, a walk-in cool room and a quaint basement wine cellar and tasting room with storage capacity for 10,000 bottles. On the lower level is a marble-floored ballroom complete with a stage for a band, as well as a 21-seat cinema. 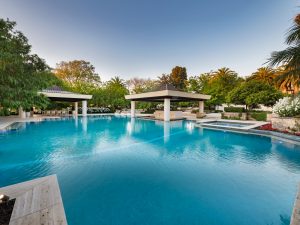 Ms Fewster declined to confirm the sale price or the identity of the new owners, other than to say the property had been sold to a “beautiful young family”.

“I don’t have any emotional attachment to the house other than a lot of memories of fantastic parties and [having] lots of friends over,” Ms Fewster said. “It was so much fun for me to sell because it’s full of great memories – I got married on the tennis court and my husband proposed to me there. I just think that it’s so nice that it’s going to a beautiful young family who is going to keep it and enjoy it.”

Ms Fewster said the sale of such an exclusive property in the current COVID-19 market was remarkable. 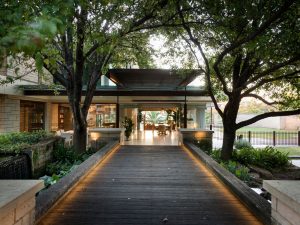 “Quite frankly, getting the figure we got in the market that we’re in is pretty special. I’ve had five offers since October and that was the best offer,” she said.

The property was sold by Eileen Bond in 1995.

Since then it has had a string of renowned owners including mining magnates Ross Atkins and Barry Patterson. The current owner Sue Gibson, bought the property with her then-husband, mining tycoon Steve Wyatt, for $39 million in 2011.

Over the years the property has entertained the likes of Elton John, Neil Diamond and Bob Dylan, as well as former prime ministers Paul Keating and Bob Hawke.

The sale is expected to settle in late September.