At one with nature: A stylish courtyard for a family of four.

They may be fans of the typology now but Michael and Anwen Batchelor did not stipulate that theirs should be a courtyard house. Instead, preliminary discussions with their architect centred on the site in question, how they wanted to use it and the way they wished to live.

The ability to engage as fully as possible with nature was a requirement – typical for a young family of four in the capital of Australia’s Sunshine State. The couple also wanted their new home to foster other kinds of connections, not just between themselves and their surroundings, but also with each other, effortlessly.

“The old house was tiny and we were always in the same space as each other,” says Michael, referring to the original cottage on the plot. And using the backyard was not without problems, remembers Anwen. Keeping an eye on the children outdoors was difficult if she was inside. 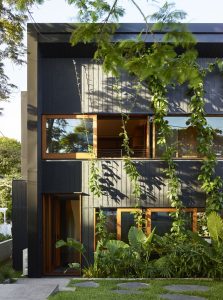 A common strategy in benign climates, the use of a thin building footprint allows for cross ventilation and natural light. The ability to view the captured section of landscape from most parts of the house meant also that the courtyard was the perfect spot for a pool. By not defaulting to the backyard, where suburban pools are often found, the Batchelors saved themselves from a lifetime of leaf-litter clean-up.

The house, consisting of two pavilions under a unifying roof, loosely separates private and public. A double-storey section accommodates parents on the top floor and children on the bottom, both levels overlooking the courtyard. Opposite, a tall, flexible, open-plan living, kitchen and dining area extends imperceptibly into the garden. 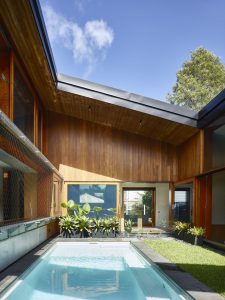 Sight lines made possible by the courtyard were multiplied and lengthened by the generous use of sliding glass panels that give new meaning to the term “open house”. They allow all rooms to be visually linked, to each other as well as to the landscape. The visual axes also trick the eye, making the house feel larger than its 250 square metres of floor space.

It is an “easy house to live in”, the couple say, primarily because of the courtyard. “From a practical point of view,” Anwen explains, “it’s easier to supervise the kids because I can be busy doing my thing and the kids can be in the pool.” 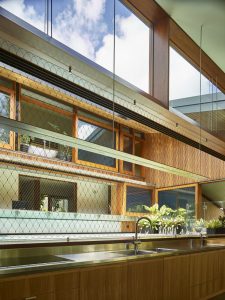 There was, however, an unanticipated drawback (apart from a glazing bill about a third of the cost of the entire house). “It drives Michael crazy but you can talk to anyone in any room of the house from anywhere,” Anwen jokes.

However, in the courtyard, voices do not bounce off walls. The enclosure relies on a full-height stainless-steel trellis to provide a green screen (creepers are planned) on the side open to a neighbour. The same wire mesh is used elsewhere in the house to comply with pool-safety regulations. 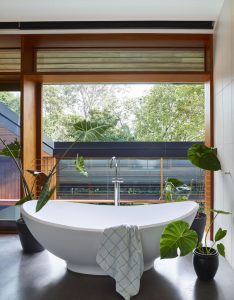 Looking back at the house from the lush garden, it is clear how the full-width openings allow for reciprocity between the building and its landscape, created in the courtyard and preserved in the backyard. The absence of a deck abutting the living area further blurs the boundaries between the two. “In Queensland everyone has a deck, but Richard [Kirk] said that as soon as you have an ‘outdoor area’, you have an inside and an outside, and you replicate your indoor furniture outside,” says Anwen.

From the house, the green view takes in an old, majestic jacaranda that persuaded the couple to purchase the property. They have already started growing a candlenut tree, however, should it succumb to age.

Such future-proofing is part of a grand plan to redevelop the adjoining property. Not surprisingly, as with the Batchelors’ first courtyard house, family and connection will be steering that discussion, alongside how landscape can be exploited for these and other purposes. “This is my vision,” says Anwen. “We’re all around a central tree and a garden while having our own private space.”