A quick peruse of headlines in the morning papers is enough to send less seasoned property investors into a tailspin at present.

Crashes, bursting bubbles and dire predictions for a doomsday type housing market downturn all feature as prominent, news selling stories. Because, let’s face it, logical reasoning and rational analysis without putting the fear of God in people, is comparatively ho-hum.

Those of us who’ve been around the proverbial block a few times with our property portfolios somehow remaining intact, despite all the negative press, tend to pay very little attention to the scaremongering. Basically, we know better.

Human nature dictates the type of headlines we see in the “daily’s”. Our species is programmed for survival first and foremost, so humans have evolved to see threats as more urgent in nature than opportunities. Hence, “The Property Market is Crashing” is far more effective “clickbait” than something like, “Long term market fundamentals stabilise.”

Those of us who are industry veterans have been there, done that and got the T-shirt when it comes to the rather rhythmical rise and fall of housing market fortunes. We’ve generally witnessed at least two to three similar downturns to the one we’re currently experiencing, over our lifetime. Yet this hasn’t prevented us from creating high performing property portfolios. Go figure…

Younger investors, on the other hand, are more likely to be gun shy when it comes to any type of “correction” in the housing markets. We’ve been incredibly fortunate and sheltered in this country, from many of the economic woes endured throughout other parts of the world in recent times. Gen Y’s, for instance, have really only grown up knowing “the good times”.

So let’s gain some much needed perspective on the pervasive “When property markets go bad” palaver that might be causing a bit of anxiety for quite a few people right now.

Not as bad as it seems

Recently, the International Monetary Fund (IMF) went out of their way to talk down the apparent impending disaster we’re on the brink of, with regard to house prices in Australia, pointing out that we’ve endured five major market downturns in the past thirty years.

Interestingly, over that same time, we’ve seen some of the most phenomenal growth occur in real house prices as well. 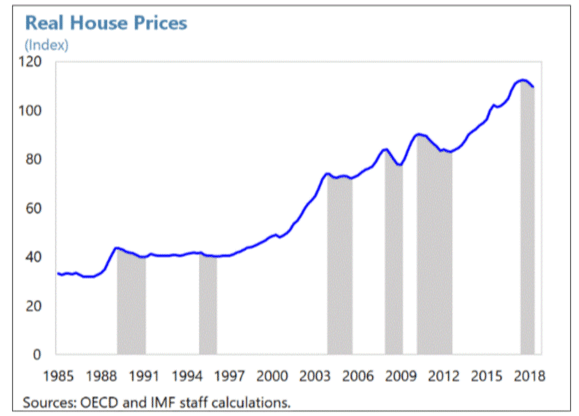 The five previous occasions where corrections were experienced include…

2.Another followed close behind in 1995.

The 1995 and 2004/05 corrections were relatively insignificant, however prices fell by more than 5 per cent on all other occasions. In this current downturn, the correction has been around 7 per cent.

The below chart produced by the IMF clearly indicates that property markets are anything but consistent in nature. We know that what goes up, must come down. This is true for any type of commodity, including housing.

Why? Because commodity prices are dependent on all sorts of moveable elements, including consumer sentiment. And we know us humans can be a rather fickle bunch!

More importantly however, consolidation is always inevitable. Particularly coming off the back of unprecedented, staggering growth in property prices, as occurred in 1988 when values soared by a whopping 30 per cent per annum.

While the recent upswing was impressive, it didn’t quite reach the lofty heights of the excessive eighties. But it was enough to see a necessary culmination in the growth phase of the cycle, in order to bring things back to a more stable, sustainable footing.

Is it a bad time to invest?

When you put the “downturn” in perspective, in light of the five previous corrections leading up to this current one, it becomes glaringly apparent that housing as a commodity is here to stay. Despite the highs and lows, it will keep on keeping on.

If you cast your mind back to the 1991 recession, the catastrophic GFC that shook foundational global economies to the core, the end of the resources boom here at home, and think about whether it was a bad time to invest back then, what logical conclusion would you draw?

If you’d invested in residential property back during any one of those “bumps in the road”, would you regret it today? Of course you wouldn’t.

But I guarantee there’ll be many who look back in twenty years time, on this latest cyclical phase, and wish they hadn’t bought into the hella scary hype of a market crash.

Keep calm and continue to invest. It’s just another dip on the real estate roller coaster.