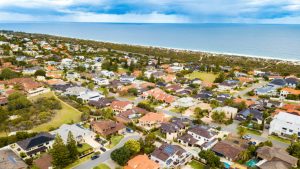 Two major banks will start offering guaranteed loans for first-home buyers under a federal government scheme from today. The move by NAB and Commonwealth Bank is one of many programs and policies starting in 2020.

Under the First Home Loan Deposit Scheme, first home buyers will be able to purchase a home with a deposit of as little as five per cent, allowing them to get into the market sooner.

The scheme — which also involves 25 non-major lenders whose guaranteed loans will be rolled out from February 1 — will support up to 10,000 guarantees each financial year.

All lenders have committed not to charge eligible customers higher interest rates than equivalent customers outside of the scheme, and many will be offering other incentives.

Applicants will be subject to eligibility criteria, including having taxable incomes up to $125,000 a year for singles and up to $200,000 a year for couples, and dwelling price thresholds.

Also on January 1, more than a million Australians on government payments will get a rise.

As part of this change there will be a reduction in the Pension Loans Scheme compound interest rate from 5.25 per cent to 4.5 per cent.

Children aged between two and 17 will benefit from an expansion of the Child Dental Benefits Schedule, providing access to $1000 of dental services over a two-year period.

A number of vaccines for seasonal influenza and hepatitis B will also be listed on the National Immunisation Program and there were will be new incentives for rural doctors.

For business, two loopholes in laws governing the superannuation guarantee (SG) will be closed.

Employers will no longer be permitted to use salary sacrifice amounts to satisfy their SG obligation to their employee or base their SG contributions on the lower, post-salary sacrifice earnings base.

In the aged care sector, the Aged Care Quality and Safety Commission will have extra powers including oversight of approving all residential and home care providers; aged care compliance and enforcement actions; and the administration of the responsibilities of approved providers to report assaults.

For farmers, the dairy code of conduct starts today — handing more clout to producers in dealing with buyers, setting up a dispute resolution process, and empowering the consumer watchdog to step in when needed.