Perth home prices are predicted to rise by 18 per cent over 2021 to 2023, fuelled by record low interest rates and freely available credit, according to Westpac economists after they revised their previously more bearish outlook. 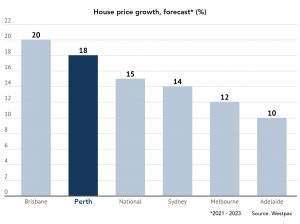 “Of most importance is that we are much more optimistic about the pace of price appreciation over the following two years,” economists Bill Evans and Matthew Hassan wrote.

Dwelling prices across the country are forecast to fall 5 per cent from peak to through by mid-2021 – half the amount Westpac’s economists had previously predicted.

Westpac expects many capital city markets to be “more resilient,” it said.

While Perth prices to remain flat, Sydney is tipped to slide by 5 per cent, and Brisbane and Adelaide by 2 per cent each. In Melbourne, however, currently enduring their second lockdown, prices are forecast to drop 12 per cent by the time the market bottoms out in June next year.

“This recovery will be supported by sustained low rates, which are likely to be even lower than current levels,” said Westpac Economists.

The bank said a more substantial boost from lower interest rates, especially low fixed rates, was one of the two main factors behind its more optimistic prediction. The other was the milder-than-expected recession.

“This recovery will be supported by sustained low rates, which are likely to be even lower than current levels; ongoing support from regulators; substantially improved affordability; sustained fiscal support from both federal and state governments; and a strengthening economic recovery,” the economists wrote.

Over the near term, prices are expected to stabilise around the December and March quarters, possibly with some modest increases, although Melbourne will be at least one quarter behind the other states and will still experience falls in prices in the December quarter, the bank said.

However, prices could see some downward pressure through 2021 as the mortgage repayment holiday ends as “we see an increase in ‘urgent’ or distressed sales relating to borrowers struggling or unable to resume mortgage repayments,” the economists wrote.

“We anticipate a more benign disruption with the incidence of distress being lower, the widespread use of loan restructuring and the timing and volume of distressed sales being carefully managed by lenders.”