Comparatively, in Perth, the cheapest suburb within 10 kilometres of the CBD is Westminster with a median house value of $404,577.

REIWA President Damian Collins said the dream of home ownership was still very much alive in Perth, which was clearly illustrated when comparing Perth’s inner-city house prices to those on the east coast in places like Sydney and Melbourne.

“There are plenty of affordable options close to the city in Perth, whereas in places like Sydney and Melbourne you’d likely need to spend over a million dollars to get your foot in the door close to the city,” Mr Collins said.

Perth is the most affordable capital city in the country

The Real Estate Institute of Australia’s latest Real Estate Market Facts report shows that Perth’s median house price in the June 2021 quarter was $515,000, which is the lowest median of any capital city in Australia and 43.7 per cent lower than the national average.

Comparatively, the median house price in Sydney and Melbourne during the June 2021 quarter was $1.41 million and $1.01 million respectively.

“There is a significant difference between what is considered ‘affordable’ in Sydney and Melbourne, versus the equivalent in Perth. A million dollars goes a long way in our local property market, whereas on the east coast you’ll most likely have to fork out close to a million dollars for your first home, which is why prospective buyers are finding it increasingly difficult to get on the property ladder in these cities,” Mr Collins said.

“We are very lucky in WA that housing is still so affordable and that, even amidst a market recovery, home ownership remains within reach for so many West Australians,” Mr Collins said. 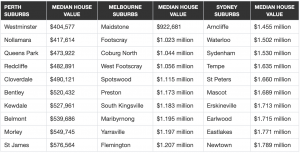