Achieving a sense of grandeur while also delivering a functional family home was a gratifying outcome for the designer and owners of this Sydney beachside property. 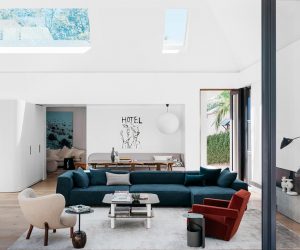 It’s not often that an interior designer is able to fully explore the parameters of her own skill set but for Megan Brown, principal of Penman Brown, that opportunity recently presented itself to her. Faced with a dated California bungalow that was to be reconfigured for a young family of five, the designer also acted in the role of architect and landscaper. “It was an amazing experience,” she says. “And while it was not without a degree of stress, it has certainly pushed me to another level.”
The position, within flat walking – or cycling – distance of one of Sydney’s northern beaches, was a winner. The house, not so much, but Megan could definitely see the potential in the block. “Although the back of the house faces south it was very private and did have this dramatic rock escarpment and stand of palm trees. I could see that we could harness that beautiful outlook to create something special.” 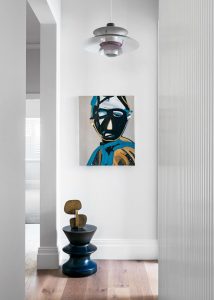 That something special came in the form of a spectacular living pavilion that she designed to link with the original bungalow while also maintaining a separate identity. With a 5.5-metre high, cathedral-like mansard ceiling, views of blue sky, the treetops and the escarpment are captured through giant skylights in the roof. Though the space housing the living/dining area, kitchen and laundry – and a study in a curved central pod – measures only eight by 10 metres it feels so much bigger thanks to the restrained and consistent palette of materials, the intelligent placement of furniture and the wide thoroughfares.

“There is a wonderful sense of relaxation and serenity in this space,” says Megan. “I wanted to create a sense of grandeur but I also put so much time into designing the floor plan for functionality, so it is a really easy house to live in.” The main entrance is now to the side of the house along a decked path, planted with tall palms and fragrant with flowering star jasmine, straight into the pavilion. Here, a modular Living Divani ‘NeoWall’ sofa is positioned to enjoy the views of the pool and the lush outdoors, while the &Tradition smoked oak dining table nestles into a custom leather banquette designed by Penman Brown along the wall. 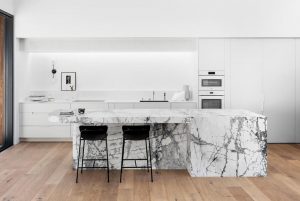 One of Megan’s favourite features in the pavilion is the lack of a television – although the family uses a projector and the wall above the fireplace serves as a two-metre wide screen. “From a design perspective, it contributes significantly to the feel of the space. You don’t realise how restful it is not to have the focus on a big television screen.” 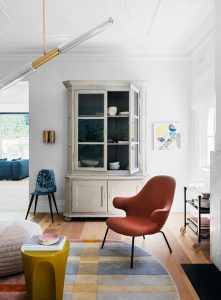 The latest technology has been used to best advantage in the house. In addition to the Sony Short-Throw projector and Sonos surround sound system, in the kitchen there are Schweigen exhaust fans that operate silently, retractable doors with Hafele hinges on the butler’s pantry and discreet Zetr light switches throughout which are beautiful elements as well as being state of the art, all underlining the home’s streamlined look.
Abundant natural light washes into the house not just from the skylights – which are fitted with coated high-performance glass – but also enhanced by the Venetian marmorino waxed plaster finish on the kitchen splashback, the bulkhead and around the walls. “When there is so much white in the house this stops it from feeling like a rigid white box,” says Megan. 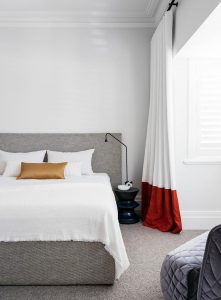 However, not everything is white. An interplay between light and dark occurs throughout, and while the original bungalow is rendered and painted white, the pavilion is clad in a dark-stained Victorian ash. All inside walls are white, with texture and interest coming from the Venetian polished plaster and the subtle repetition of linear patterns, whether in the meticulously detailed joinery, the VJ panelling, the ribbed C&C Milano linen cushions in the master bedroom, or the fluted glass window in the family bathroom.
While Megan was painstaking in the creation of the pavilion, the rest of the house was just as well considered. Some of the traditional features were retained, such as the original fireplace and the decorative ceiling in the formal living room, though she changed the architraves and skirtings as she felt the existing ones were “too fussy”. “I was very conscious of retaining what is of value – and I certainly didn’t want to knock down a double brick house – but I wanted to create a feeling of simple elegance, and replacing some of the old-fashioned fussy elements helped to maintain the serenity that exists in the pavilion.” 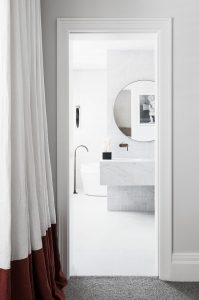 When it came to furnishings the neutral backdrop allowed for some selective injections of colour, so the modular sofa is in a punchy teal, the Edra ‘Gina’ chair in the formal living room in the original part of the house pops in bright blue, and the master bedroom curtains are colour blocked in cream and rust. “It was very much about texture and pattern, and elements of colour could come and go,” she says.
The final flourish was the landscaping and Megan put herself forward for that job as well. The palms at the back of the house are replicated along the side entrance and create the vibe of a tropical resort, while the standout plantings are the giant tree aloes beside the pool that blend in well with the succulents and existing greenery. 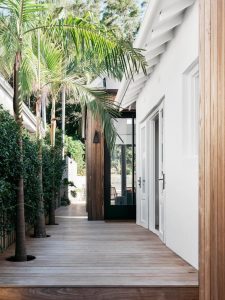 While in many ways this is the quintessential beach house, it is so much more, offering elegance and refinement alongside the undeniable relaxed vibe. “For me the success of it is how you feel in the space,” says Megan.