This residence in a Perth heritage zone keeps its Victorian sensibility at the front, but has some surprises out the back. 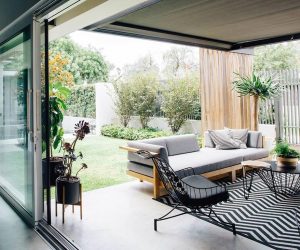 This contemporary cottage in a Perth heritage protection zone, by Adelaide-based architects Williams Burton Leopardi, first began with a completely unrelated phone call from the client. She had called out of curiosity to ask about a beautiful stone featured in a previous project by the firm. The stone was Kanmantoo, a bluestone mined from the Adelaide Hills — which quite literally laid the foundations for a new double-storey residence that took the place of the existing dilapidated house.

“We want to blend spaces but not build big barns,” says principal architect David Burton, who designed the family home to grow and evolve with its owners. The house opens and closes through a series of panels that allow both intimacy and privacy.

“Quite often in open-plan living spaces, you’re trying to sit down to read the paper and have a coffee in the morning, but someone could be watching TV with the volume up, so you get a lot of potential clashes. It’s nice to even philosophically move the spaces a little bit so you get that feeling like you’ve actually got that separation but you’re still connected as well,” David says. 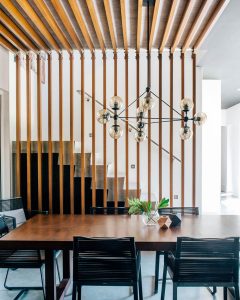 The dining room is bordered by timber batons, part of the home’s signature pared back aesthetic. The owner imagined a traditional front with Victorian proportions, but with a surprise out back to take advantage of the property’s location on a corner site. This “stripped back, contemporary version of a cottage” is comprised of six bedrooms (including a studio over the garage, a study room and a playroom), and two living areas where the family dine and lounge. 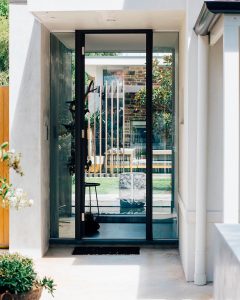 The Perth Residence was designed to be transparent, with windows peeking into the leisurely courtyard space from different perspectives. “From the street it looks like a cottage. You go to the entrance and you catch a glimpse into the courtyard space at the back and this transitions through the house. Every room opens out to the courtyard,” says David. 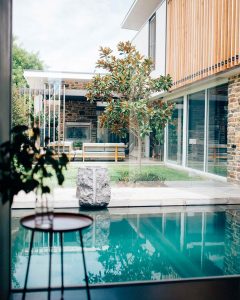 The house is arranged around its plunge pool, which “acts as a water feature when no one’s bobbing around in it,” notes David. 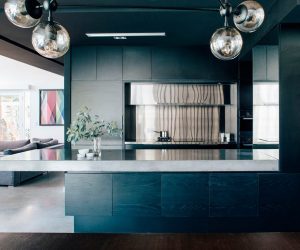 The kitchen is painted a dramatic black, designed to function as both a casual cooking area and a space for entertaining. 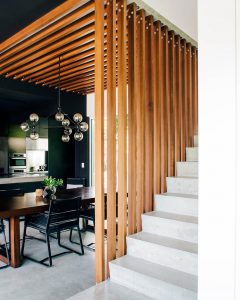 The dining room welcomes in light from both sides to illuminate its dark timber finish. The timber batons that pave the ceiling form a balustrade to the stairway. 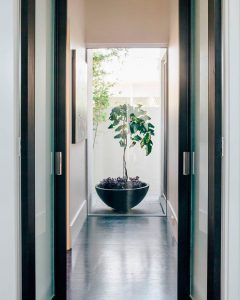 The entrance into the bedroom from the foyer. On the left is the dressing room and ensuite, with the master bedroom on the right. “It’s all built into one space, with windows to let plenty of light in with doors to close the rooms off and panels to allow privacy,” says David. 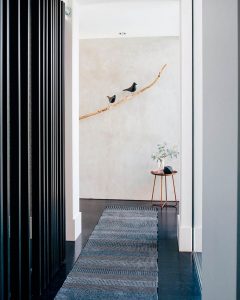 “All the living spaces can slide past each other. They’re still connected but there’s levels of separation as well. If you’re sitting in the living room and someone is in the dining room, you can still talk to each other with raised voices but not necessarily feel intruded by what’s going on in the other space,” says David. 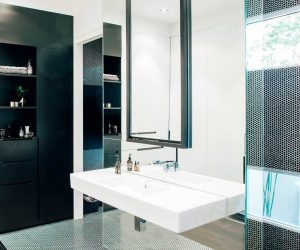 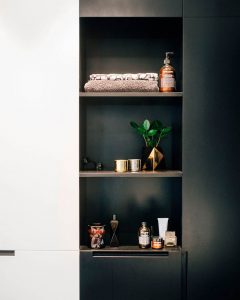 As a small site, the design packs as much as it can into a cosy amount of space. |